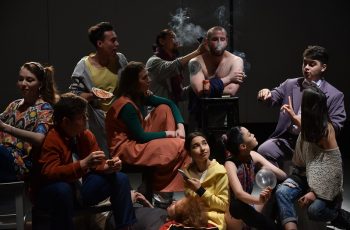 “The text of the play” is not a finished play, but a compilation of intimate stories. In the citizens’ stage, the performer and the author are not always the same person, but all the monologues that sound here are not fictional. These are live voices of real citizens of an exact city with their own inner world.

“I love you, but” is a play of the documentary theater in which everyone shared their story of love. It’s love for oneself, fellowman, family, and country.
The director of the project is Miriam Tscholl (Germany)
Miriam Tscholl is a stage director and curator of several state theaters in Germany and Austria. She inaugurated the first Bürgerbühne project (Citizens Stage) in Staatsschauspiel Dresden and has been the Artistic Director of the Bürgerbühne from 2009 to 2019. She initiated and supervised the first Bürgerbühne as well as formats such as Bürgerdinner and Montagscafé.
Miriam teaches at several European universities.
The aim of the project is to learn more about the artistic and social methods of professional theater with non-professional actors.
The rehearsals of the play were held in an online format with the students of the “Ilkhom” Theater of Mark Weil and the citizens of Tashkent.
The play includes a describing of scenes of sexual violence.

The project is under the support of the German Embassy in Tashkent.
The duration of the play is 1 hour and 45 minutes
The opening night happened on April 9, 10, 11, 2021
THE AGE CATEGORY OF THE PLAY IS 16+