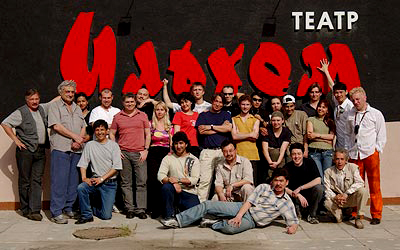 6 and 7 stages of the Laboratory
The sixth and seventh sessions of the Laboratory were led by director Ovlyakuli Khojakuli. The unique experience of one of the most interesting directors in the region, its level and international reputation make the Laboratory program interesting and rich.
From August 17 to September 25, 2009 (5 weeks), the Laboratory for Young Directors of Central Asia and Kazakhstan, organized by the Mark Wail’s Ilkhom Theater and the Swiss Office for Cooperation in Uzbekistan, continued its work. During the sixth and seventh sessions, the project organizers decided to attract completely new participants to the work of the Laboratory, who chose the work of a director as their profession. This time the program focused mainly on attracting young directors from provincial theaters of Uzbekistan, although among the participants there were also young directors from neighboring countries (Kazakhstan, Turkmenistan). All of them have primary vocational training; most of them have an experience of independent productions either in educational theaters or on professional sites. And all of them confirmed their desire to continue comprehending the profession within the Laboratory.
The expansion of the program and the “geography” of the Laboratory make it much richer and complex. The resonance that the Laboratory has received from the beginning of its activity aroused wide interest in the professional environment. And that is precisely why the organizers, via increasing the number of new participants, plan to create a professional network, where they can meet, share their experiences, and participate in creative projects, both new participants of the Laboratory and participants of its first sessions. The organizers dream is to create optimal conditions for such a trade union, as well as provide a professional and creative environment by attracting high-class specialists, using highly artistic literary material.
The laboratory will enable them to be the part of the best team in Central Asia, with a Master who has established himself in the international theater arena. Mastering both classical and modern avant-garde dramatic medium in the framework of the Laboratory sessions is a rare opportunity for a young director.
The Laboratory for young directors was and remains the laboratory of creative searches and experiments.
The basis for the creative process of the 6th and 7th sessions of the Laboratory (August 17 – September 25, 2009) was the work on two plays. The first play is “Hamlet” by William Shakespeare. Work on “Hamlet” was carried out with the actors of the Mark Wail’s Ilkhom Theater (in Russian) under the guidance of Laboratory Master Ovlyakuli Khojakuli. During the classes, the Laboratory participants took part in the production of “Hamlet”. Laboratory participants became assistant directors. Moreover, laboratory participants had a practical opportunity to work with actors on the implementation of the performance intention (etude method). To do this, the text of the play was divided into fragments, and the Laboratory participants became responsible for working on the episodes assigned to them.
The second work is the project “Doctor Faustus Legends”, which is based on folk stories about Faustus, translated into modern language by the young Uzbek playwright Zjenechka Palekhova (into Uzbek). Work on this project was carried out together with the actors of the Uzbek drama theaters under the guidance of the Laboratory Master Ovlyakuli Khojakuli.
The result of the sixth and seventh sessions of the Laboratory was to increase the level of practical assistance in implementing creative projects of young directors starting their career in the profession and, eventually, to hold two open demonstrations of laboratory examination works.
An open show of laboratory participants took place on September 21, 2009 at 18.30 at the Mark Wail’s Ilkhom Theater.
The first part – excerpts from the play “Hamlet”
The second part – excerpts from the performance of Zhenechka Palekhova’s “Around Faustus”.
The laboratory for young directors gives its participants a unique opportunity to get acquainted with the work of experienced professionals, to adopt, transform this experience and apply it in their own creative work on the theatrical platform of Central Asia.

8 STAGE OF THE LABORATORY

Directors from Uzbekistan, Tajikistan and Kyrgyzstan took part in the 8th stage of the Laboratory for Young Directors of Central Asia and Kazakhstan.
Vladimir Pankov (SounDrama studio, Moscow) was the master of the laboratory.
This year’s program was based on the practical engagement of laboratory participants in the production process of Vladimir Pankov. It included: a series of lectures, seminars, master classes by leading experts.
The Laboratory Educators:
Viktor Ryzhakov – Director, educator, artistic director of the Theater and Cultural Center named after Vs. Meyerhold (Meyerhold Center), director of the A. Volodin Theater Festival, director of the “New Drama” directing and drama laboratories, winner of the Golden Mask Russian National Theater Award (Moscow).
Mikhail Ugarov – Russian playwright, director and screenwriter, member of the organizing committee and one of the organizers of the “Lyubimovka” festival of young drama, artistic director of the “Theater. DOC”, artistic director of the “A. Kazantsev and M. Roshchin Center for Drama and Direction”, head of the seminar for young playwrights, ideologist of the movement “New Drama”.
Elena Kovalskaya – art director of the “Lyubimovka” Festival of Contemporary Drama, a famous theater critic and expert. She graduated from the theater faculty of the RATA – Russian Academy of Theater Art (GITIS – State Academy of Theater Art). She worked as literary director at the “School of contemporary play” theater. She was a grader and for some time, a director of the New Drama festival. Since 1999 she has been working as a theater columnist for the Afisha magazine. She teaches the history of foreign theater in RATA. She’s a winner of theater awards “Debut” and “The Seagull”. She is one of the founders of the School for Theater Leader (Meyerhold Center).

Dates of the Laboratory: April 11 – May 23, 2013.
The project was implemented thanks to the support of:
Swiss Cooperation Office in Uzbekistan
Ministry of Culture of the Russian Federation
Netherlands Foundation of Prince Claus

• Site-specific theater: Directors are increasingly looking for alternative, not theatrical spaces. Unlike the black box of the scene, these places have their own mood, their own memory. They keep different stories and the performances find ways to revive them. The place determines everything – the production literally “grows” out of its microclimate, architecture and purpose. The main task of site-specific theater is to destroy the stereotype perception of the theater. The audience is not just watching what is happening. It inevitably falls into the “epicenter” of events and becomes part of the play. The place dictates its own rules of conduct with which participants must agree and abide by them unconditionally. Audience is forced to move in an unfamiliar space, navigate in unforeseen situations and interact with actors, sometimes even lead the initiative. Usually site-specific performances are inseparable from the place in which they are created. This is the only context where they are understood.
(October 27-29) – The festival “Ill Home” was held, under the slogan: “The Theater is around us. Theater is inside us.” During this festival, young directors went beyond the usual theater space: and took up the development of a new territory – not a stage, but an unadapted platform. The festival show of the laboratory participants’ sketch works took place in an abandoned gallery (above the Ilkhom Theater). The total area is 2000 square meters.
Teachers and curators of the Laboratory from Uzbekistan:
Theater experts, art managers, stage designers, musicians, actors and directors: Boris Gafurov, Shukhrat Abdumalikov, Muhabbat Tulyakhodzhaeva, Sukhrob Nazimov, Thibaut de Ruyter (Germany).
Directors from Russia: Zhenya Berkovich, Yuri Kviatkovsky, Ksenia Petrenko.
The project was supported by the Swiss Cooperation Office in Uzbekistan and the Prince Klaus Foundation (Netherlands).

Main themes:
• Theater. Music. Poetry: The 10th Laboratory is associated with the staging of the poetical play by Marina Tsvetaeva “Fedra”. The production of the performance by the director Vladimir Pankov and musical director Artem Kim provided an educational process for its participants at the Ilkhom Theater. Laboratory participants attended all the processes of production, from the conceptual design and rehearsals to the release of the performance. The training format included analysis of the rehearsal process, daily discussion of rehearsals, methods and materials with the Laboratory Master and the Music Director. The ability to understand and embody the synthesis of theatrical production and live musicians, the choreographic solution of a poetic text – that’s what laboratory participants had to master during the work process.
The 10th Laboratory principal is based on the CCM (Collective Composition Method). Together with the OMNIBUS band, Artem Kim creates the “Collective Composition Method” (CCM), a unique system for arranging the creative process, which is based on the idea of producing an artwork by a team of authors who are also the performers of this artwork. The method offers specific mechanisms for managing the creative process, both individual and collective ones, at all stages – from the emergence of the initial idea to the structural completion of an artwork.
In many ways, the CCM reinterprets the roles of not only the authors and performers of an artwork – the director, composer, actor, musician, but also the audience itself – the viewer and listener. The CCM includes practices (exercises, trainings, games, etc.) that teach you how to feel energy and information flows, and how to manage them. The practices are aimed at developing an intuitive sense of the band and structure, the ability to spontaneously improvise, physically and emotionally concentrate and relax in the process of individual and collective creativity. Each participant was provided with poetic material to work at the CCM Laboratory. Each participant created a group of 2 to 3 actors of the Ilkhom Theater and 2-3 musicians. The educational demonstration of the CCM results to the viewer was held on October 14, 2017.

11th STAGE of the Laboratory for Young Directors of Central Asia
This stage was held from September 15-30, 2019, in cooperation with the “Theater Leader School”, operating within the Meyerhold Center, Moscow.
Laboratory Concept 2019: creative tandem of director and art manager.
For the first time, art managers and theater directors were invited to participate in the Laboratory, ready to work in tandem with theater directors.

On September 23, the private screening of the work results of the Young Directors Laboratory participants was held in the master class of Yekaterina Bondarenko namely: “Theater of the townspeople”.
On September 30, the results of the Laboratory for Young Directors of Central Asia were shown at the Anastasia Patlay master class namely: “Documentary Theater” – “Sometimes I Fly”.
The laboratory was held under the general support of the Swiss Cooperation Office at the Embassy of Switzerland in Uzbekistan.