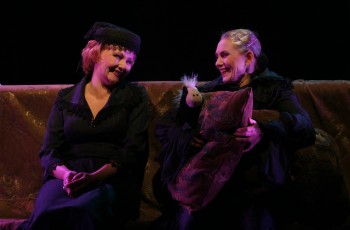 Written by Edward Albee – three time laureate of the Pulitzer Prize, one of the most prolific American playwrights, whose plays are successfully performed around the world for over half a century, almost all are dramaturgical bestsellers. “Three Tall Women” won Albee one of his Pulitzer’s in 1994.

Albee dedicated this play to his late adoptive mother. To those who know Albee’s story, the personal tone raises no suspicion: like the son of his main character, he left home in his youth. He even took his adoptive father’s last name. And now that he is older, he has to pay the price: there are only three characters in the play, and no one but them is given a voice for self-justification. This play is about every age having it’s own truth, reason for worry and taking offense, as well as finding a reason to forgive. All three women (ages 92, 52, and 26 respectively) are simply the hypostasis of one who lived a long and unhappy life. They are unified in three faces. The line between “I” and “we” blurs. Comic dialogue turns to confessional monologues.
The premiere of the play was held on October 22nd, 2005.
Running time: 80 minutes without intermission.