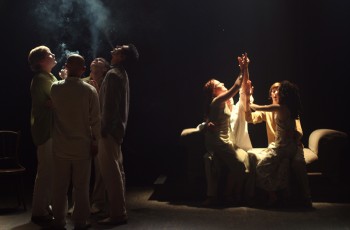 The basic of a new performance is a novel “Eugenie Onegin”, who in the interpretation of Mark Weil has become an original structure. It’s unusual because there are lots of the main heroes. There are five Onegins and about the same number of Tatyans in a “new” novel!. By the way, the group of Onegins is a charming international team The Synthesis of Onegins, believe me, not only throws the audience into a tender emotion, also makes a “spicy” selfless playing of young actors.

The performance is a novel on love, feelings and heartlessness, tears and irony, about time and us. One cannot find nails and starched necks of the XIX century in this performance: all the characters are contemporary young fellows and the story-language is a contemporary one, and the music is written by contemporary musicians, only the frame by the penetrating Ruichi Sakamoto creation is. The performance is based on the “Evgeniy Onegin” by Pushkin. The authors followed the style in the details – the expression of the word, thoughts and feelings. When one following Pushkin he is to open the world. The main characters of the performance are young people of different appearances and temperaments, different points o view on life. The spectators have the opportunity to pronounce well-known Onegin’s lines and to dissolve in different versions of Onegin and Tatiana’s characters. The main point still to find out of a magic crystal the scope of the novel where some other characters of Pushkin’s sketches will meet quite organically: “Count Nulin”, “Gavrilliada”, and provocative “Small Tragedies”: “The feast during the plague” and “Stone Guest”. It becomes quite clear the characters to meet someday as the plots and the characters explain a lot of through the image of each other. That very meeting is the main point to make the performance to appear unique, the plot of is impossible to foretell then.

The Premiere of the production 10.09.1999 Duration of the performance 3 h ”Such Pushkin hasn`t been staged yet” T. Bogdanova Dosug, December, 1999 The audience laughs, telling the words to the actors, when he specially makes a pause. My neighbour tells to her friend a similar story from her life. There are buffon, caricature, lyric and drama without any sentimental tears, satire and frivolity. What is that all about? Who is the Author? Eugeniy, “our good friend”, is presented in different characters and faces. He is a two-meters height, fair-haired man, or a short and fat man, like a handsome Vyacheslav Czyu. Pushkin`s poems are heard like in a choir, the stage and the audience change with one another, the actors are with the audience, sometimes playing with them, speak ironically, showing not only Pushkin`s heroes, but us with you, too. The poems, hearing in the performance, are free of hypocrisy saint, even the famous letters, which the Director has broken into lots of small pieces – ines, mirror the world in the faces, crossed the past and the present times. “Romance unleashed” Aleksandra Voloko “Vecherniy Tashkent”, October, 27, 1999 Remembering, in 70s somebody told if Pushkin was resurrected nowadays, he’d be in raptures of jeans, electric guitar and girls in short skirts. When you see “Ubu Rex”, you understand that it`s the truth. To say about the modernity of classic is commonplace, but I can`t think anything better. Hannibal’s descendant is modern, it’s the fact. The authors of the performance could catch the spirit of freedom, irony and what’s especially important – the youth, regning in Pushkin`s works. Here you remember that Onegin isn`t an “Uncle” in cylinder, and Tatyana became a lady only in the last lines of the “Romance Unleashed”, but during the whole performance they are very young people. Oleg Filimonov “Molodeg Uzbekistana”, October, 1, 1999 And where is Pushkin? Pushkin is here. A bust is on the table of Tatyana Larina (the same in Onegin`s study). Noisy clown lines? In the basic of which are the same epigraph from Horaziy: exegi monumentum. The brilliants of the word’s images and musical rhymes/ All this is Pushkin. Let`s take his physical presence for the basic, then everything will be more clear. We get used to relate to the poets as to memorial. Mark Weil revives the memorial, stripping from the poet’s soil the granite and bronze, and from the soil of his works simple polish. Enduring to the heroes of present performance, fluency being in a holiday atmosphere (like the sky in Petersburg), also feel attacks of Khlestakov`s manner. You’d like to cry about your, spectator’s role in this performance: “We are the friends with Pushkin!”