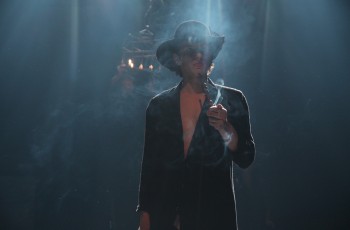 The play “Ghosts” was written by Henrik Ibsen in 1881. The characters in the play experience the highest peaks of passion and bitterly pay for them. Other playwright contemporaries noted the similarity of the play “Ghosts” with the ancient Greek tragedies, where the theme of ancestral curse is central.

The play raises problems of heredity, guilt and responsibility, as it were in late 19th century Norway, like an explosion. Only a decade after writing, was the piece performed for the first time on stage. “Ghosts” was regarded as a challenge to public morals and scandalous. All were shocked by the fantastic phenomenon demonstrated by Ibsen – fatality succession of lies and wickedness. The main characters in the play “Ghosts” are man and his soul, which, being a long time under the yoke of deception and pretense, mutilated into something destructive inner world and the essence of the person. The project was implemented specifically for the Ibsen Festival in New Delhi (Delhi Ibsen Festival) with the support of the Norwegian Embassy in India and the Academy of Dramatic Art and Design in New Delhi (Dramatic Art & Design Academy).

The premiere, played in New Delhi, on December 3rd, 2012, was a huge success with the audience.