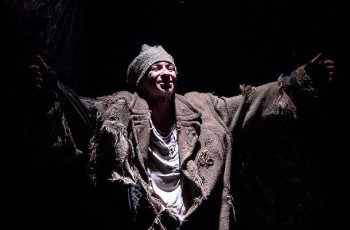 “Tortilla Flat” in “Ilkhom” this is the performance about how in people, who live doggy life, humanity does not die but rise to life and how kind, sincere dogs set an example to us, people, reminding that we are not a pack. “Men and Dogs” by Yuriy Aleksandrov, “Pravda Vostoka” newspaper, 11 April 1995 “Tortilla Flat” came to life on the Ilkhom’s stage in January 1995, not only as a drama but also as a work of music, a musical. It’s authors were inspired by the novel of the same name written by John Steinbeck in 1935. An important feature of the American writer’s style throughout all his works was a combination of romanticism and a sober, sometimes intentionally severe, uncompromising view of reality. This feature is in many aspects characteristic of “Tortilla Flat”. The spirit of adventure, the characters appearances and intonations packed with humour are combined here with open naturalism and a guest for ideals. Steinbeck’s characters are inhabitants of a quarter in the town of Monterey, whose ancestors accumulated there from different parts of the world and settled on the California beach one or two hundred years before. Unpretentious boozers and philosophers, they have ecologically pure souls. When they face the severe reality in the shape of words “rent” and “deposit”, they brush it aside because they live “on the swift crest of a wave”. The atmosphere of “Tortilla” is made of Time and Space of Love. Of Time, sometimes as slow as a summer day, and sometimes rushing headlong from the Monterey Hill. Of Love which happens here to all every once in a while; and which gives that mystically magnetic power to Danny and his House. This is performance about Danny, about the House and their friends, amigos. Amigos… They sing while happy. They sing while sad. They sing when they cannot help singing… their hearts are overflowed with feelings. Boozers but philosophers! That is why happens that is without even knowing it, they challenge their fate and come into conflict Freedom and Time as they slip away. Theatre Festival “Navruz” 1995 (Uzbekistan) Prize for Best Direction – Mark Weil Prize for Best Actor and Best Actress   Theatre version – Mark Weil Composer –Igor Volodchenko Lyrics of songs – Mark Weil, Oleg Lugovskoy Production – Mark Weil Stage designer – Vasily Yuriev Choreographers – Elvira Anisimova, Bakhram Matchanov Vocal – Natalya Kobzeva, Igor Volodchenko Stage Manager – Oleg Lugovskoy The AMIGO song was recorded by Shavkat Dautov and Natalya Kobzeva   The smoke is used in the performance does not contain harmful tinge and does not cause allergy.   The World Premier January 12, 1995 The premiere of a new version – November, 2006 Duration of the performance – 3 hours 30 min