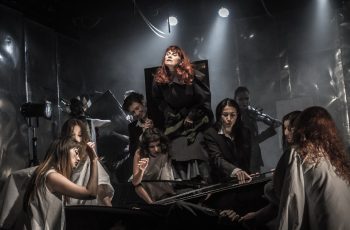 “Phaedra” is a collaborative project between the Soundrama studio, the Omnibus ensemble, and the Ilkhom theatre. The mythological plot of this ancient tragedy tells the story of a mother’s forbidden passion for her stepchild, and acquires new facets in Tsvetaeva’s interpretation.

For the poetess, “Phaedra is the extreme of love’s shamelessness and fearlessness, and she, herself, is the “follower and singer of extremes.” And this song of Tsvetaeva’s, fits perfectly into the rules of the game determined by Soundrama – the broken and torn poetry crumbles into sounds, sighs, and groans of the multi-voiced ensemble of actors and musicians.

The main partner of this project is the Swiss Bureau in collaboration with the Embassy of Switzerland in Uzbekistan.

Costumes for the production were created based on the sketches of A. Vesnin

The production uses the letters of M. Tsvetaeva

Duration of the production: 2 hours, 10 minutes