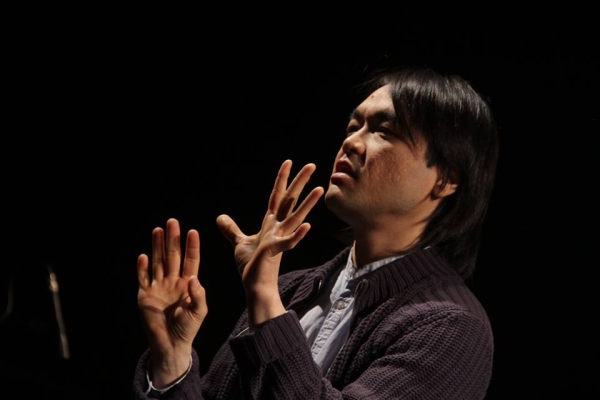 Artyom Kim’s Laboratory THEATRE+MUSIC began its work in January of 2016. This is a collaborative project of the Ilkhom Theatre of Mark Weil and the Omnibus Ensemble. Over the course of half a year, the Laboratory has been leading theoretical and practical lessons on plasticity, rhythm, and improvisation. The participants of the Laboratory see their goal as finding a new stage language, experimenting with synthesizing various types of art, and the creation of an encompassing space of communication for artistic people in Uzbekistan: actors, directors, painters, dancers, playwrights, and musicians. During its collaboration with the Ilkhom Theatre, the Laboratory has presented three performances: “Counting to Seven”, “The Mysticism of Sound”, and “Flight to the Skies”.
The end of the six-month cycle of Artyom Kim’s THEATRE+MUSIC Laboratory work was the preview of the project “Airport” – which connects within itself all branches of the Laboratory’s work. The preview took place on June 25th and 26th, 2016.
In the 41st theater season, Laboratory participants worked on the creation of the “Heart of a Dog” project based on the novel by Mikhail Bulgakov, which premiered on September the 8th, 2017.
The 42nd theatrical season opened with the premiere of “Symphony” – a joint project of the Artem Kim Laboratory, Mark Weil theater “Ilkhom” and the Omnibus ensemble.