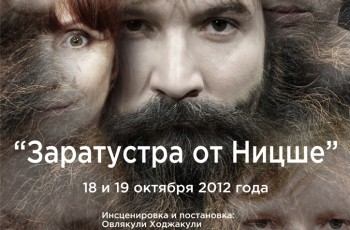 “Thus Spoke Zarathustra” by Friedrich Nietzsche wrote some statements and arguments about what it means to be a human. The director of the play, Ovlyakuli Khodjakuli, took the theatrical, paradoxical and contradictory text of Nietzsche and transformed it into an idea – an intellectual game “mozgomolka”. A unique direction – the transformation of the performance into a game in which everyone present can participate. The game is a way to convey feelings, thoughts, and ideas. Round by round the players in the game seek solutions, but at the same time, ask countless questions that remain unanswered in the void. The plasticity of the actors, the instantaneous conversion from one character to another, combined with musical compositions, creates a weightless effect. The performance is filled with a leaden sense, challenging and mysterious. Help solve the puzzle, by participating as our audience to the show “Zarathustra by Nietzsche.”
The premiere took place on the 18th and 19th of October, 2012.