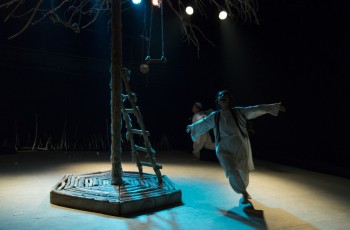 “WHITE WHITE BLACK STORK”
Inadvertently startling storks – their own children, not adults broke the nest, and life itself. This performance of “Ilkhom” has risen to the heights of Shakespeare.
Stanislav Altunyants. “Truth of the East”. Tashkent, 1998. “Ilkhom” Refer to page unfinished, quite unique to the Turkish-speaking writers, a little-known story “From the notebook Kalvak Makhzumi”, adding his theatrical version of scenes from the novel “Past Days” and the play “The unfortunate bride.”

In the version of “Ilkhom” we encounter the world of young boys and girls, who have not had the time to grow strong wings under the traditions of their fathers. The play explores the defenseless world of the senses first love. Its action takes place in the early twentieth century in Tashkent, which is divided like the Russian Empire in two cities: Russian (new) and Muslim (Old Town). The teenagers growing up in this city, are deprived of the right to be themselves.
The world of their parents rigidly subjects them to the conventions of society. Makhzumi, a young boy, experienced his first, almost unconscious feeling of love for his companion of the Islamic madrassa school, Karim and a girl, Mohichehry. Unfamiliar with each other, Makhzumi and Mohichehru are married. They are married with the purpose of rehabilitating all of the wrongs of young Makhzumi.
In the play, the color of youth is poetic and humorous and the simple-minded view of the world of teenagers turns “black and white”. A drama that does not fit into any framework of human nature, with it’s tragedy, depending on the bias, covered with the traditions and laws of Sharia. The play appeals to our rich scope of emotions and our diverse thinking. Truism: People – God’s creation are unique and therefore untouchable.
This truth, with all of its immutability, continues to ignore the realities of life. Least of all, “Ilkhom” and the authors were interested in the truth of the play of life. Universal motives and the stories of the characters clean up the soul – the life that’s on the stage is a tree with a flying circle swing. When death occurs, the crown of dry branches falls heavily to the ground.