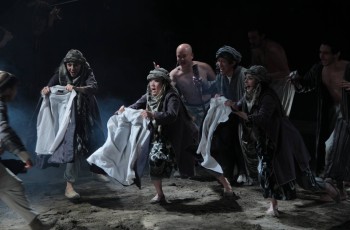 Seven Moons written by Alisher Navoi is a poetic, Sufi parable about the mysterious equilibrium of fame and infamy, greatness and humiliation, about a shah who once had everything, but lost it all because of his regal pride. This is a tragic play about inflated wishes, about ambition becoming paranoia which hurts the lyrical soul of the artist. Navoi’s masterpiece came to life on-stage in close collaboration with the

Russian studio “SounDrama”. In this play, traditional music of the Middle East is combined with contemporary rhythms of the West, creating a cocktail of sounds and energy. From this combination and the elegant, office-style attire as well as the bright colors of traditional, Uzbek robes, the plasticity of Middle Eastern dance and the composure of European gestures, the beautiful Seven Moons, worthy of the great Navoi himself, was born.