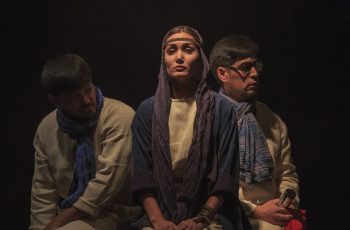 This premiere performance of Mother Courage and Her Children (Mutter Courage und Ihre Kinder) a play written by Bertolt Brecht, is a joint project of DIYDOR Theater-Studio and ILKHOM Theater.

The play written by Brecht in 1939 reacted to the events of the day but even today it turns out to be relevant because Thirty Years’ War described in the play continues to this day and seemingly has no beginning or an end. Ouroboros is a serpent eating its own tail.

Like a magnifying glass, the war enlarges everything in a human – all the qualities that are noble and vice. Let us imagine ourselves under this magnifying glass? Are you scared? Or is what we’ll see under the glass our common reality?

This story is about how an endless war transforms into a lucrative business.

This is a story about how a layman can adapt. About the little people of the big world. About a woman who has lost her destiny. About a shoe for Cinderella who runs the show on the battlefield. About the fact that we are mired in petty worries and lose and forget about what’s important. That instead of leeching off the war, sometimes it is enough to at least cry out: “Stand Down!”

The performance in Uzbek with Russian subtitles!

The premiere of the performance took place on October 5, 2019.