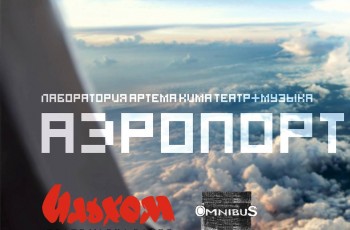 The play “Airport” was formed from metaphorical parables, real and fictional characters and stories collected by the project team. It was then composed into a single storyline by the young playwright Nikita Makarenko, and director Artyom Kim. The play is set at an unidentified airport, in an unidentified city.

Is life better in places where we’re not? Or is it only better because we’re not there? Does happiness depend on geographical location, or is it contained within us? To leave or not to leave? The answer to this ambiguous and nerve-wracking question will be sought out by the audience members together with the theatre actors and the “Omnibus” ensemble musicians. The creators of “Airport” conceived this project as a play “in progress.” The storylines, characters, and scenes will continue to change as long as the play lives. The audience will participate directly in this process: the theatre encourages everyone to send in their personal stories related to the airport, emmigration, and goodbyes. These stories will have the chance to be embodied on stage and become part of this large play-parable.
The play “Airport” was a logical continuation of Artyom Kim’s project Laboratory THEATRE+MUSIC, which began its work in January of 2016. This is a collaborative project between the Ilkhom Theatre of Mark Weil and the Omnibus Ensemble. Over the course of six months, the Laboratory conducted theoretical and practical trainings on plasticity, , and improvisation. The participants of the Laboratory see their goal as finding a new stage language, experimenting with synthesizing various types of art, and the creation of an encompassing space of communication for artistic people in Uzbekistan: actors, directors, painters, dancers, playwrights, and musicians.
Musicians: